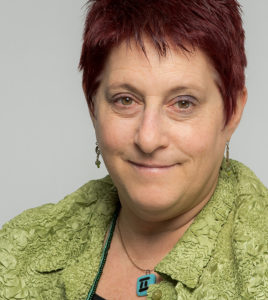 ACAC’s eleven-member Commission is pleased to announce that after a many months-long search in late 2019, we have filled the Public Art Coordinator staff position with the eminently qualified Ms. Lizzie Zucker Saltz. Saltz remarked that she “is delighted to be working again on behalf of Athens’ artists and cultural landscape.”

Known best as the founder of ATHICA—which she directed from 2001 through 2012—she earned her B.A. from Barnard College of Columbia University, NY in 1984, where she had the opportunity to intern for numerous Manhattan-based arts organizations. In 1993 she completed her M.F.A. in Spatial Arts from San Jose State, CA. She exhibited her own sculpture and installation work nationally for over a decade, as well as interactive electronic projects created in collaboration with her spouse, Dr. David Z. Saltz. When Dr. Saltz landed a job with UGA’s Department of Theater and Film in 1998, they relocated from Stonybrook, NY  to Athens. Saltz familiarized herself with our local art scene by writing art reviews and features for Flagpole Magazine until 2000. She also published arts features and reviews of artists from across the US for the international Art Papers Magzine (1998 – 2003).

Saltz applied lessons learned curating on Long Island, NY, to Athens; creating exhibits such as 2000’s Rock Art: An Exhibit of Visual Art by Athens Musicians (2000) with Melissa Link, and Eclectic Electric: An Exhibit of Electronic and Digital Art (2001), both mounted at the Lyndon House Arts Center.

While Director of ATHICA (2001–2012), she curated 25 exhibits, oversaw 45, and collaborated with 100’s of local and national artists, performers and young curators. She specialized in presenting thematic exhibits—such as Nurture about breastfeeding and parenting, Running on Empty about the fuel crisis, Upcycle and Third Act: Contemplating Aging–exhibits which attracted audiences numbering in the 800’s.

After Saltz retired from ATHICA, she collaborated with curator Dr. Chris Cuomo in 2013 to bring Climate Change: Conveying Realities, to a pop-up space in the Bottleworks, creating a 24-page full-color catalog, as well as posters and other publicity for the 13-week run.

She has worked for numerous non-profit arts organizations from the San Francisco International Film Festival to ABANA, the Artists Blacksmith’s Association of North America, as well as environmental non-profits such as The Athens Land Trust and the Sustainable Forestry Initiative.

She is excited to learn more about the processes that make quality public art possible, and to be able to help enrich Athens’ artistic environs. Ms. Saltz succeeds Tatiana Veneruso, who served as ACAC’s administrator from 2017-2019.

No comments yet. You should be kind and add one!

The comments are closed.