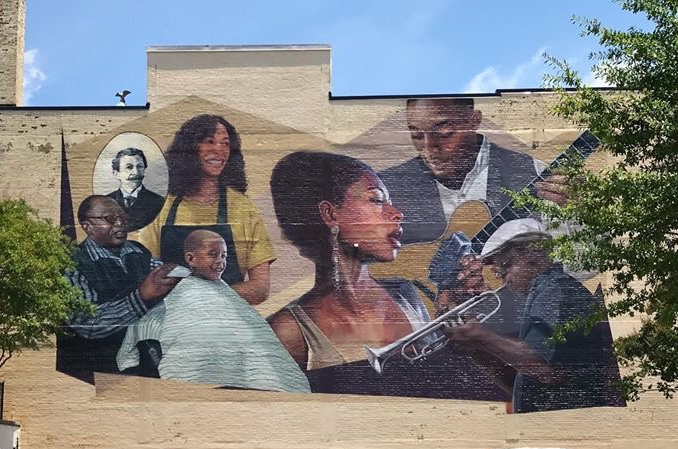 Many of you have noticed the new mural on Washington and Lumpkin Streets in Downtown Athens. The mural titled Hot Corner: An Athens Legacy was created by Miami based Elio Mercado along with Athens artist, Broderick Flanigan. Funding for this project was provided by the Athens Cultural Affairs Commission with matching funds from an Art Works grant from the National Endowment for the Arts.

A national call for proposals went out earlier this year. A local panel comprised of community members with ties past and present to Hot Corner, reviewed the proposals and selected Mercado from over 40 submissions. Flanigan has been involved in ongoing oral history projects to document Hot Corner and was an obvious choice to serve as local liaison for the mural project. For 3 weeks this past June, Mercado and Flanigan worked tirelessly to bring the legacy to life.

Said Mercado of the project, “It was an honor to contribute to the thriving community that surrounds Hot Corner in downtown Athens. To see the pride that the community has for its neighborhood and to be a part of Hot Corner history has been an amazing experience. This mural is meant to pay homage to the deep roots of Hot Corner, with images depicting some of the more notable members of the community through the years, including the Morton Theatre’s founder, Monroe Bowers Morton, a scene from the Wilson Styling Shop, and a tribute to the musical heritage that evolved here.”

“For me this mural has been a milestone in my career as a muralist/painter. It signifies a point where it is time to level up and experience the fullness that this path has to offer. I’m forever grateful to those who made sure I was included in the process. And a special thanks to Elio and the Cultural Affairs Commission for the support and guidance.” said Flanigan, he added “To have this accompanying mural to add to the legacy of Hot Corner will serve as a visual reminder of what was and still is a major part of Black history in Athens.”

No comments yet. You should be kind and add one!

The comments are closed.